by MauiWine | Posted on | in Uncategorized 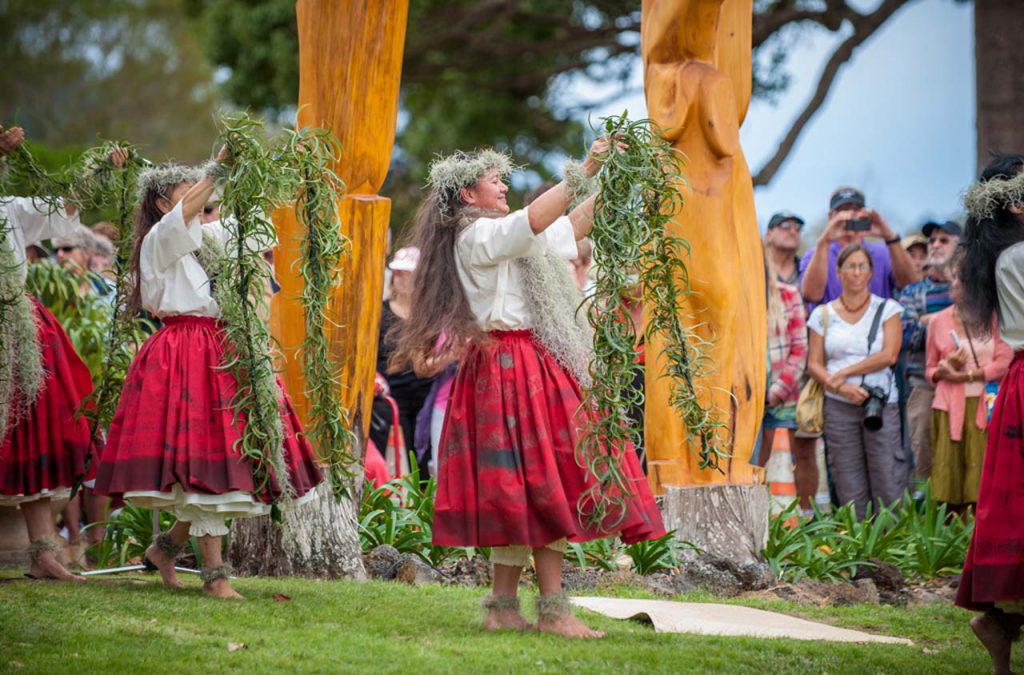 Out of loss comes cultural renewal and preservation at Ulupalakua.

By Sky Barnhart for MauiWine

A late winter storm in Ulupalakua has brought unexpected—but as it turns out, not altogether unwelcome—change to this historic area.

In March, strong gusts of wind brought down two ancient cypress trees that graced the entrance of Maui’s Winery. Planted in the 1870s, the trees formed part of a ring known historically as the Hula Circle. Here, the “Merrie Monarch,” King David Kalakaua, used to sit and watch his hula dancers perform. It was one of his favorite pastimes during his frequent visits to Rose Ranch, symbolizing an era of reawakening for Hawaiian culture and tradition.

The devastation of the two trees—one lifted right out of the ground, roots and all, and the other snapped four feet up—was deeply saddening at first, says Paula Hegele, winery president. But when analysis revealed the broken tree was rotted inside, for safety reasons it was clear that the remaining trees in the circle would have to go.

“After the initial shock, we realized this loss could evolve into something meaningful and lasting,” Hegele says. “We wanted to find a way to represent the circle’s significance and communicate the past almost more clearly than the actual trees had done.”

The answer came in the form of local Maui artist Tim Garcia. An award-winning sculptor who works in both wood and stone, Garcia was honored to receive the call to carve the remaining 8- to 9-foot stumps into their next incarnation.

“I’m excited and challenged by the task of capturing the movement, grace and beauty of hula in these sculptures,” Garcia says. “Hopefully, as you sit, walk and look into the works, you’ll be taken back to a place where you can feel the wind, hear the chants and see the energy in the abstract forms created out of these cypress trees.”

The wood from the 145-foot-tall trees was milled onsite at Ulupalakua Ranch and will be used for new Winery fencing, further strengthening the connection from past to present.

“The trees represented more than history—they also embodied the hospitality of Ulupalakua,” Hegele says. “Here, the ancient art of hula was once again performed and enjoyed. They danced! It’s one of the things that have made Ulupalakua special to many kumu hula. We’ve had halau from around the world come to dance here on the same spot that celebrated hula during King Kalakaua’s time.”

Visitors to the winery will get a first-hand look at Garcia’s creative process as they walk up the path to the historic King’s Cottage tasting room. With the goal of completing the first three sculptures by the end of April, the artist is hard at work.

Interestingly, with the loss of height, the hula circle itself has become more defined. No mistake, Garcia says. “There is still magic in these trees.”

We can’t wait to host you in a new way at MauiWine! Book a reservation for seated service in the King’s Cottage Tasting Room using Resy. Walk-ins are welcome (a wait time may be quoted). All outdoor, covered seating. 11 am-5 pm Thursday through Sunday. See you on the lanai! CLICK HERE TO RESERVE